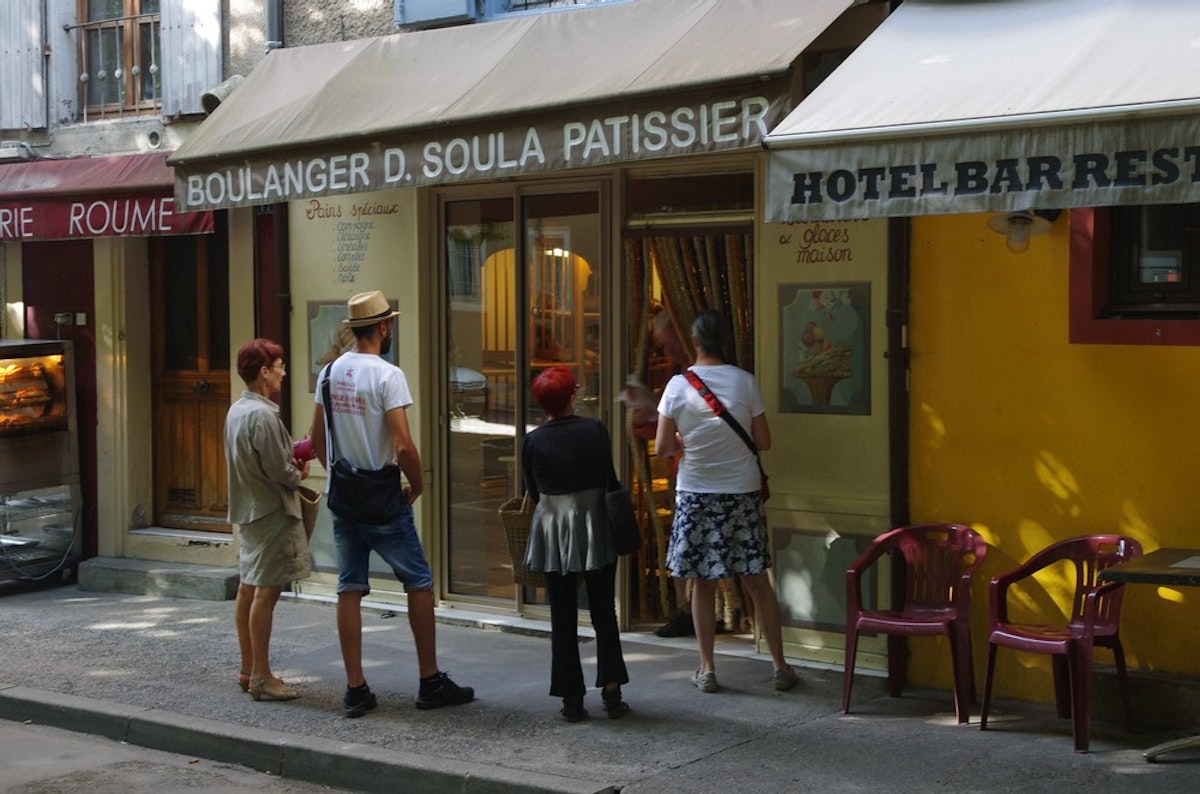 One day in France - The last two tickets to the Rollingstones

Annie joining the locals queueing at the Boulangerie this morning

Generally the French don't seem to be in to queueing much, but there appears to be one exception, baguettes! They regularly queue in bakeries and down the street in a very orderly manner. I've never known anyone in Australia to queue up for bread. We missed out the other day, there were a few left but apparently the baguettes were all spoken for. A short while earlier one Frenchman had come out with two baguettes, I've never seen anyone happier, you'd think he'd just bought the last two tickets to the last Rollingstones concert, but no, he'd just got the last two baguettes. 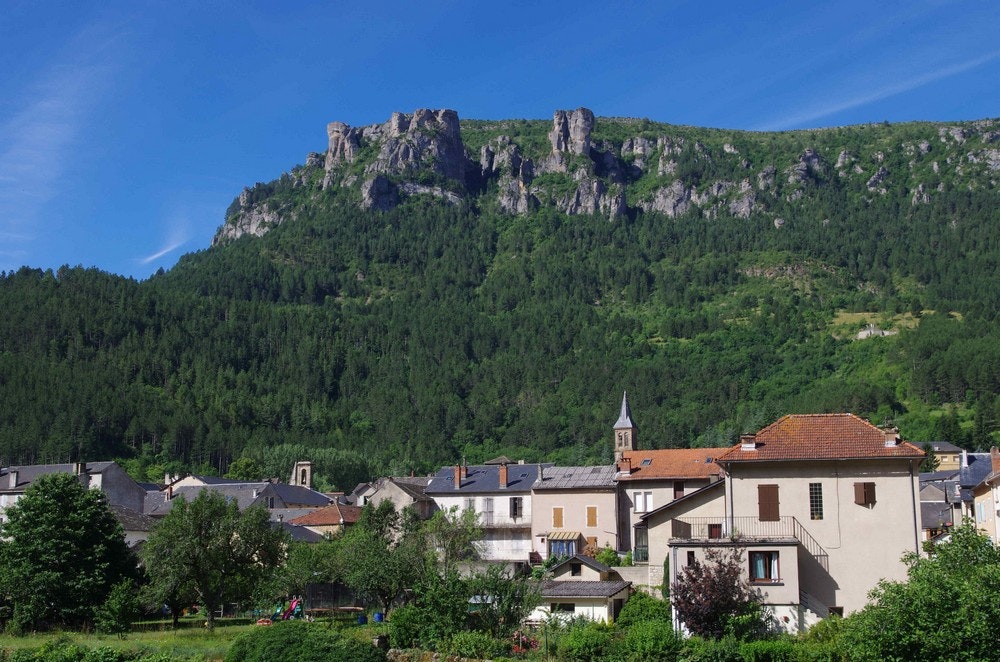 Florac sits neatly in the valley

After breakfast, our shop pastries and a coffee with milk at a street cafe, we headed for a walk out of the town of Florac, up on to the mountainside above. It was a beautiful day for a walk and I was amazed at how many butterflies there were. 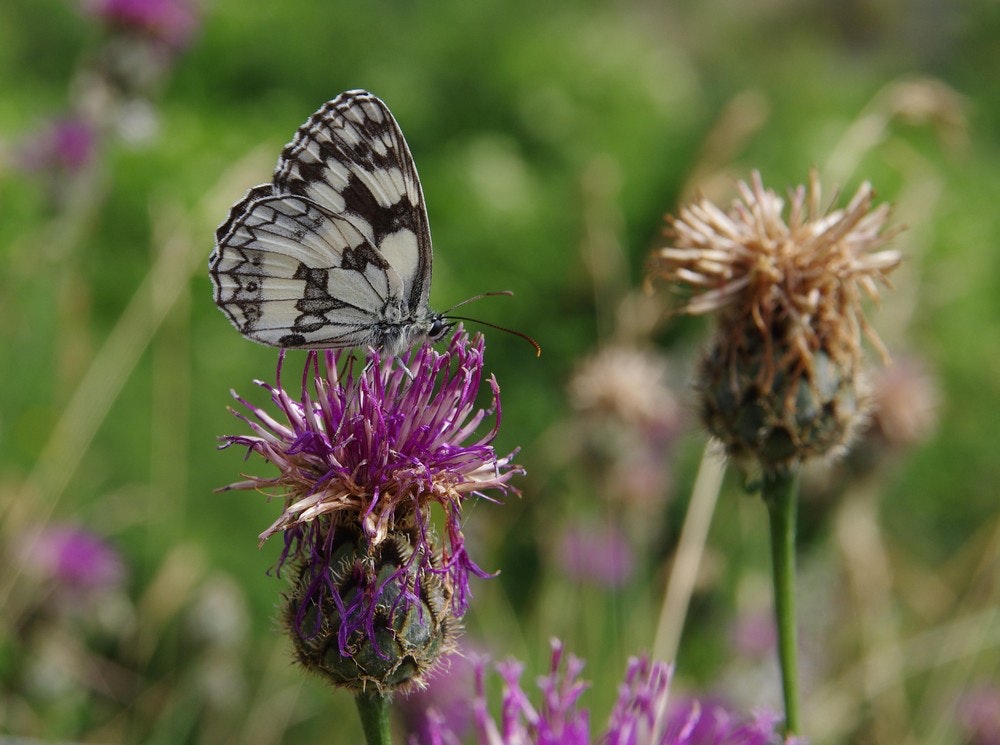 We had spectacular views back over the valley and the town and up to the mountain top high above. 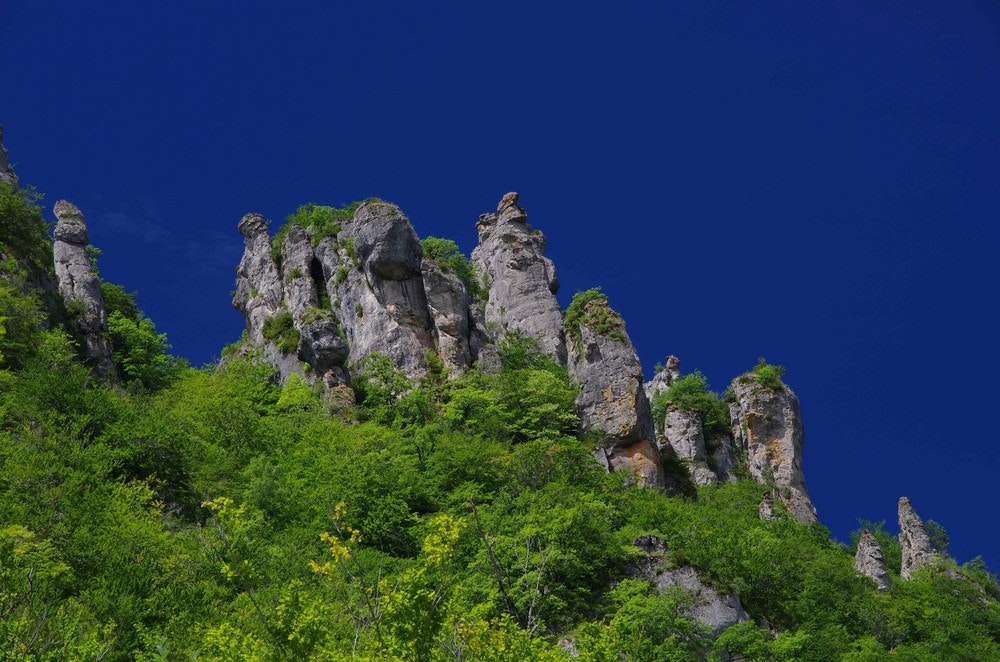 We had our typical lunch, baguettes of course, with pate, cheese and tomato, and some fruit and nuts. After lunch we passed through a tiny old village on our way back down the mountain. 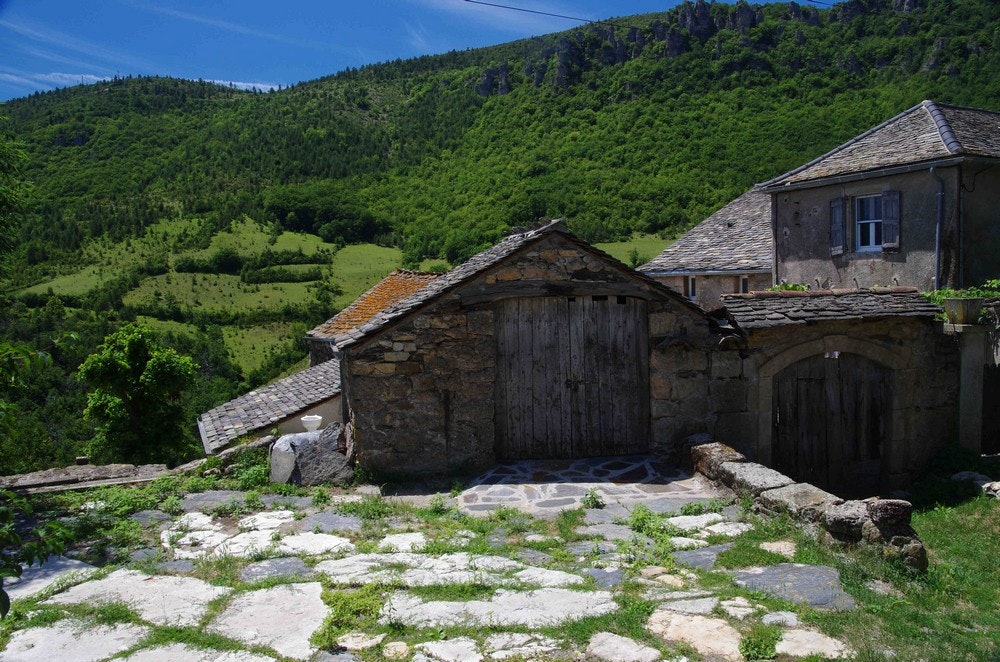 It was only a three hour walk but we were pretty tired by the time we got back, so after a well earned beer we had an afternoon siesta before catching up on our diaries. It was soon time for dinner, we had a salad and a pizza, which we shared, along with a half carafe of red wine. 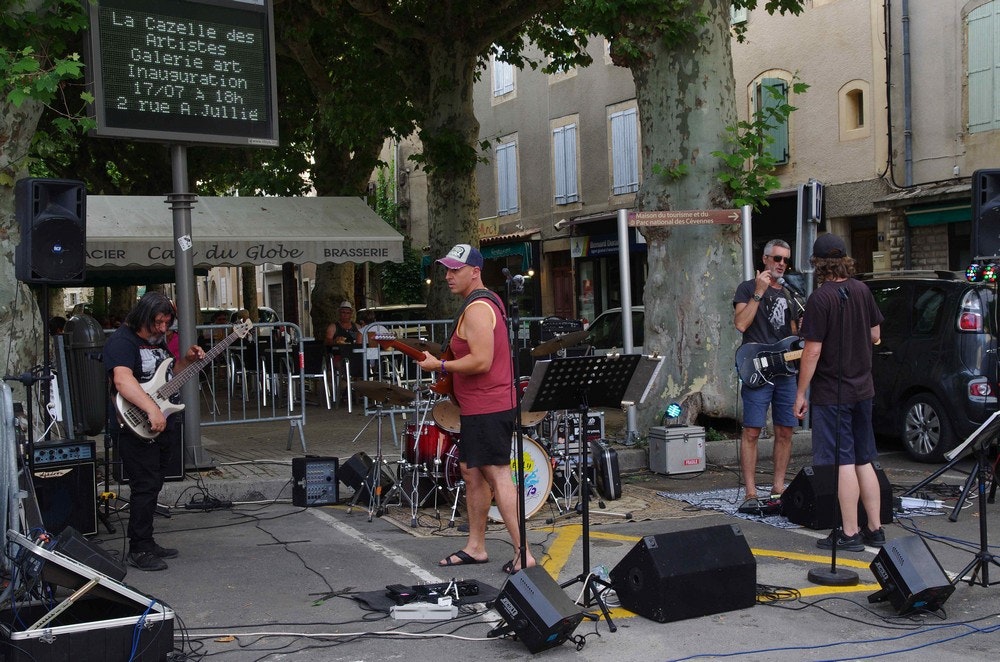 While we were having dinner a band began to play in the town square, adjacent to where we were sitting, we were not expecting this. Appropriately the first song they played was "Honky Tonk Woman" by The Rollingstones, so we didn't miss out after all!

Meals are always a challenge due to both language and cultural nuances. We decided to have coffee after dinner, choosing two coffees (capuccino and grande) from the printed menu, when they came we got two short blacks. 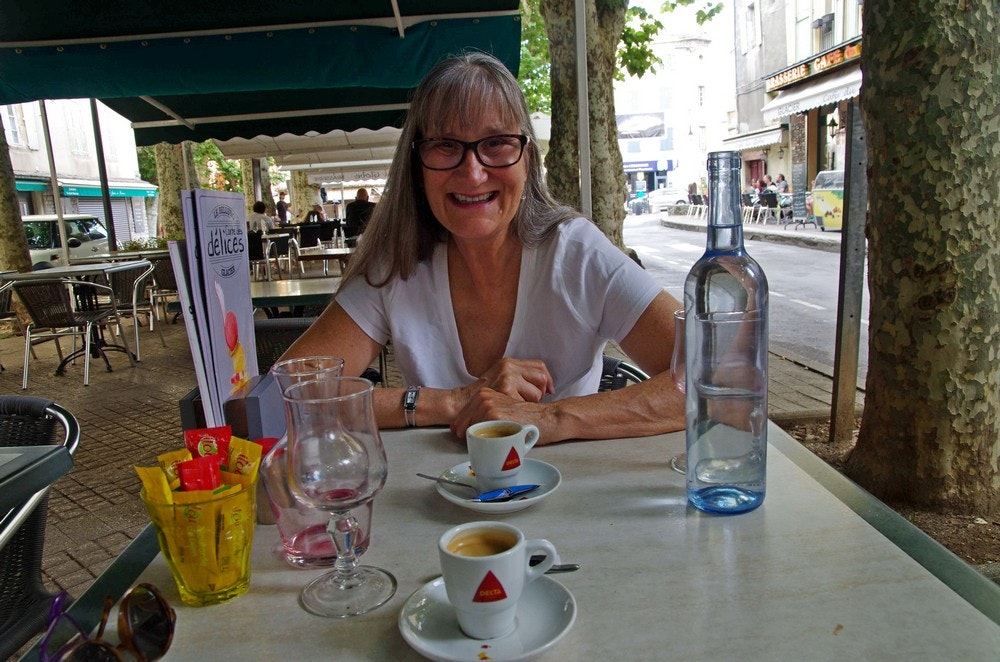 Our two slightly unexpected coffees. As we were now fully charged up and there was still plenty of light left I decided to head back out of town on the bike to the next village, to photograph something I had seen yesterday as we passed through, but the light wasn't so good then. 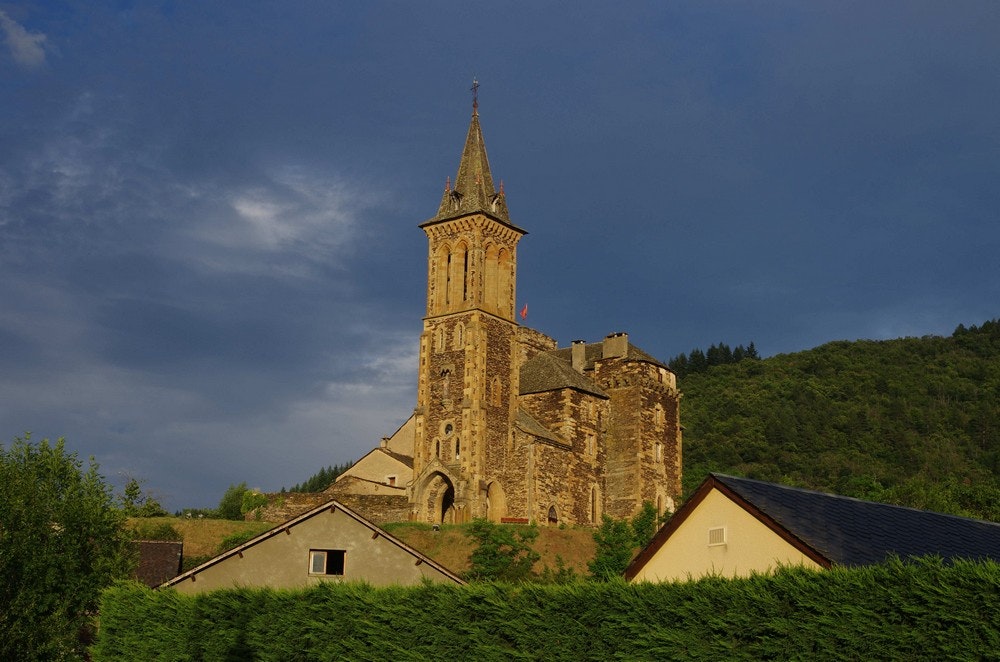 At 9pm the light was much friendlier than when we came through yesterday afternoon. Actually the light has been a bit of a problem as it has mostly been far too harsh from about 9 am to 8pm, so photography is best done outside this period, but this is not usually when we are out on the road so scenery pictures have been somewhat limited. 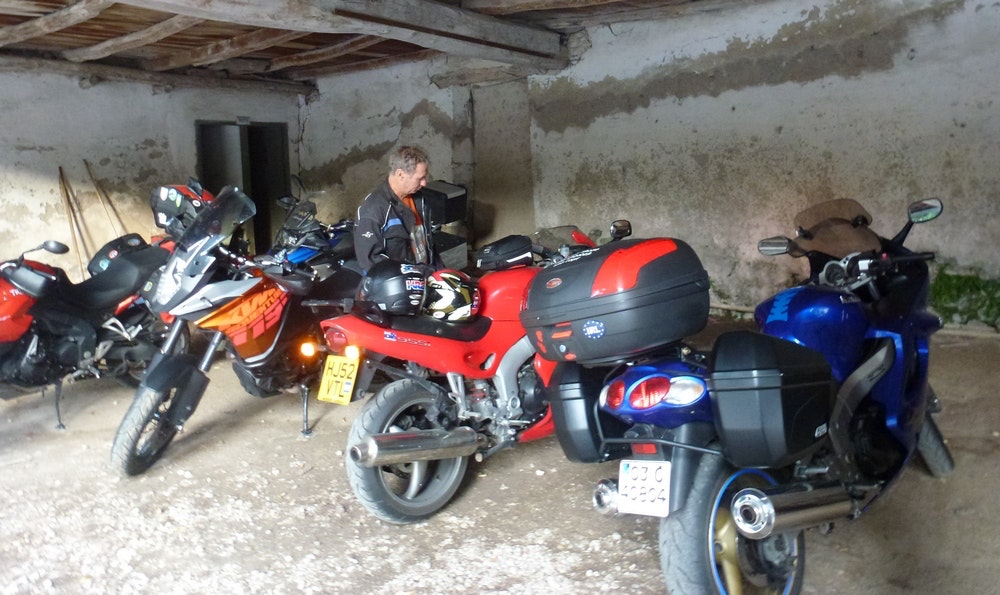 Time to park the bike up for the night at The Grand Hotel du Parc Florac where the bikes are given undercover treatment, very nice. Here our bike is joined by others from France, Sweden, Ireland and Austria.

And so ends a day in the life for us here in southern France, I hope it wasn't too boring, normal blogging to resume shortly.